for Silicon Wafer of Solar Cell

Our devices measure the crystal quality of silicon wafers using the new technology “HS-CMR method” (High Speed – Current Modulating Resistivity method) developed at the Institute for Materials Research, Tohoku University. The devices comprehensively measure all the elements (electrons, holes, defects, impurities, etc.) related to the conversion efficiency of solar cells in a silicon wafer, and thereby it can accurately measure the number of electrons (number of effective carriers) contributing to power generation with one parameter.

By clarifying the number of effective carriers in the wafer that could not have been measured accurately, it can be helpful to improve pn junction technology, one of the most important technologies for solar cells. In addition, by adjusting the amount of dopant diffusion for the number of effective carriers on each wafer, the overall performance of the solar cell produced can be increased.

・Up to 25 slices of wafer of 156 mm square can be stored in the cassette.
・Well suited also for laboratory with its compact body. 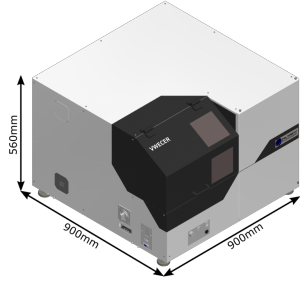